In April 2010, the second workshop of "Introduction to Letter Cutting" by Emi Gordon was held in Osaka and Tokyo. Here is a report by Kunihiko Okano of Shotype Design on the workshop in Tokyo.

Six months had quickly passed since the well-received letter-cutting workshop in Osaka in October 2009. Emi Gordon returned again from the United Kingdom to hold a much-awaited new series of the workshop. Although this time being divided between Osaka and Tokyo, all of eleven attendees of the last workshop returned as well, proving how successful the first workshop was.
Unusually for mid-April, a cold rain was falling on the first day. The Tokyo workshop was held in the Ikejiri Institute of Design, a facility that used to be an elementary school and now houses design studios, a café, and the like. The three-day workshop began at ten o'clock in the morning with everyone introducing themselves. There were a total of ten participants consisting of six newcomers and four attendees of the last workshop, including myself. Most were calligraphers and three were designers. I told myself not to be daunted by the fact that I was the only male attendee there.

After the self-introduction of the participants, Ms. Gordon briefly explained the outline of the workshop and made us feel relaxed by reminding us, "Keep your own pace. There is no need to rush." The very same words that she gave us at the last workshop helped me not to panic and to take my time with the task at hand. She told us that we need not finish carving all our letters during the workshop and that we could even spend a week on a single letter. She let us take our time so that we understood each process well. 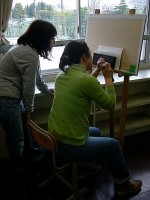 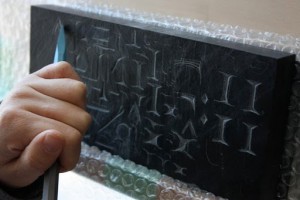 The work began by splitting up beginners and non-beginners. Non-beginners readily set up their easel and began carving the letters that they had started during the last workshop. Those of us who participated in the last workshop from Tokyo had gotten together occasionally for a study session and had each carved on our own, but because some time had passed, we had forgotten the feel of how to carve letters into a stone. So we began by practicing carving using the reverse side of the stone until we remembered what it felt like. As we repeated carving serifs, letter stems, and curves, Ms. Gordon took the time to check on our work and give us some advice. Her instructions were very clear as she not just explained in words but was careful to demonstrate what she meant. It is difficult to understand only by words the angle that the chisel should be held and how much force should be applied to it, but her demonstrations helped us greatly to grasp them.

The beginners were divided into three groups and each worked on polishing the stone, drawing designs, and preparing the tools. All participants including non-beginners had been assigned to draw a design of the letters to carve. Several critique sessions were held before and after breaks and we exchanged opinions as each person reported on the progress. Since I usually work alone as a freelance designer, it is not easy for me to ask for someone's opinion even when I am pondering on a design. In the workshop, however, everybody gave their own point of views, allowing me to see things I would not have seen on my own. All the attendees had keen senses and they came up with new ideas and pointed out even a minute detail of a spacing problem. By exchanging opinions, we were able to see things we would not have seen working alone and to correct or adjust details to finalize our designs. Mistakes cannot be afforded in stone cutting. A slight distortion of a line on a drawn design would be transferred onto a stone and last semipermanently. The positive criticisms by participants reminded me to be more careful and precise in my daily work.

Cutting letters directly into a stone allowed me to make numerous discoveries that I would not have made from any other experience. In my daily work I draw sketches by hand as with the stone, but since I usually finalize my designs on the computer, I can make as many corrections as I want. When confronting the stone that I had spent time polishing, however, I found it hard to begin cutting into the stone for fear of making an error. Experiencing stone cutting made me realize that I usually do not feel that sense of tension in my daily work. Another point that I found refreshing is that stone cutting requires the use of all five senses. Seemingly tangible computer data are in fact intangible: they are so intangible that if you turn off the computer while working on it, the data will disappear without a trace. In contrast to this, there is an unquestionable sense of matter in a stone. It feels cool to the touch and its expressions differ by the angle of light. While cutting into the surface with the chisel, we can sense a faint smell and taste, and even the sound from the stone changes according to the angle of the chisel or the force applied to it. To cut a stone is quite simply to converse with the stone using all five senses. Another thing that I gained from the experience was learning about the origin of letters. The serifs on Roman letters are largely influenced by the movement of the brush, but I felt that how the chisel cuts into the stone and the angle that the cut is made are also greatly connected to the form, and I could gradually imagine how to cut into the surface to make a beautiful serif.

I think that one of the benefits of taking a workshop is the chance to talk with other attendees during the actual workshop, lunches, post-workshop gatherings, and such. In this particular workshop, there were also visitors who participated in the critique session, adding a breath of fresh air to the workshop. 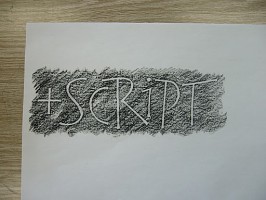 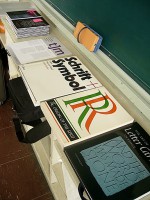 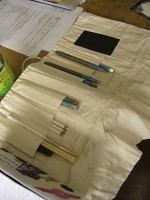 This is a report by Hiroyuki Kinoshita who took the workshop in Osaka from April 17 to 19.

This was my second time to participate in the letter-cutting workshop, and for me the first and the second ones were closely related to each other. Though I am a beginner in the field of letter arts, I have designed an original typeface, and this served as an axis that joined the two workshops. After the first lesson, I revised my typeface design based on the knowledge I gained there, and in light of this, I decided that my theme for the second workshop would be to have a deeper understanding of serifs. The two three-day workshops gave me a precious opportunity to learn the essence of letters, and this is an asset that I will treasure for life.

In the previous workshop, I learned more from what is required before carving rather than how to carve. It was quite a shock for me as I did not expect it at all. Our assignment for the workshop was to draw Roman capital letters, so I thought we would begin the lesson by carving those letters. This was not the case, however: a great deal of time was spent on examining and redrawing letters numerous times. I realized that a failure to draw a beautiful line in our head could lead to small hesitations that hold us back from carving letters. No matter how we take care to draw a very fine line in our sketch, there is no way to avoid the line traced on the stone to become thicker. Without a clear image, therefore, we cannot carve a fine line on the stone. It was the moment that I knew why sufficient preparation was so essential. After the workshop, I reexamined my typeface and realized that it is far from polished or ready to be shown to anyone. The workshop enabled me to see something that otherwise I couldn't notice on my own. I made improvements on the typeface based on this experience and signed up for the second workshop. 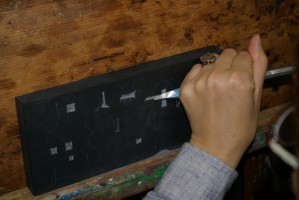 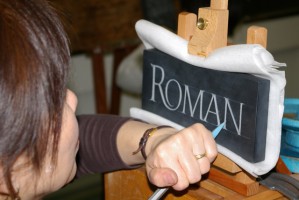 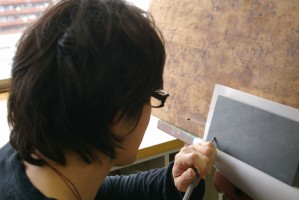 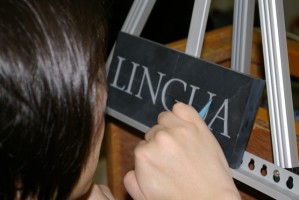 The second time around, I recognized that participating in the workshop meant resolving issues that had been unclear to me. So this time I focused on a better understanding of serifs because I wanted to overcome the hesitations I had with them. One of the benefits of a workshop is to have my works reviewed by harsh eyes. All the participants of the second workshop had good eyes and gave me constructive and objective opinions. I knew it was important for me to make modifications during this workshop as I do not have this kind of opportunities in my daily life. At the end of the first day, thanks to one of the attendees, I had a chance to draw letters with a flat brush. (Thank you, Ms. Shimizu!) When I looked at my sketched letters after drawing, I noticed numerous problems with my serifs. I was able to see how a serif should be drawn by following the movement of a flat brush. It took me two days just to modify my sketch of the letters I planned to carve, but I was satisfied that I had a better understanding of serifs.

Finally on the last day of the second workshop, I had a wonderful experience of being able to draw a smooth line in my head. As with the first workshop, I spent two days for preparation and finally held a chisel on the last day. However, because I already knew that sufficient preparation was more important than to finish carving, I actually looked forward to holding the chisel rather than feeling frustrated. Finally, I began to carve. I was simply moved when I realized that I had a clearer image of the outline of the letters compared to the last time. As practice, I first drew a light line with a white pencil on the reverse side of the stone with an uneven surface, so the line I imagined and the line on the stone were totally different. It was an indescribably great feeling that I was now able to carve along the imagined line, not along the actual line on the stone. At the first workshop, I understood logically what Ms. Gordon said about the significance of preparation before carving letters. This time I was able to see its importance firsthand. 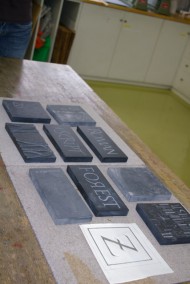 Now that the second workshop has ended, I compare my sketch of the letters and the carved stone and see a gap between the beautiful lines I imagined and the actually drawn and carved lines. The actual lines seem to lack subtle tensions, and they look like they are just keeping their shape. However, given that the two workshops lasted only six days, I think I made an amazing progress. For a beginner with letters like myself, what I gained during the time is an asset I will treasure for life.