In 2004 a representative of the Manuel Neri＊1 Foundation called to ask me if I would be interested in contributing to the making of a one-of-a-kind book that would include Manuel's original drawings combined with a poem by Pablo Neruda＊2. The one book ultimately led to a project that lasted five years and resulted in the creation of 16 books, a series of seven books with the poetry of Pablo Neruda, and nine books with Federico García Lorca＊3 poems. In April of 2012, Stanford University hosted an exhibition of seven of the books along with some of the preparatory sketches. 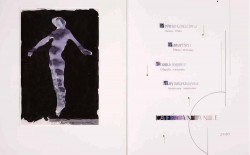 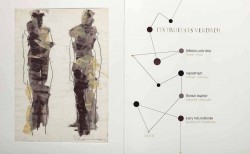 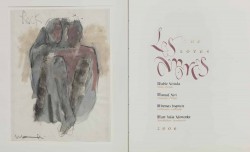 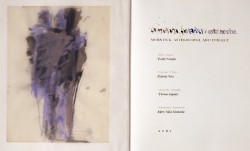 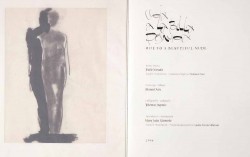 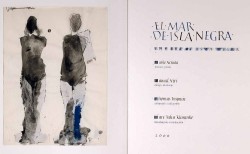 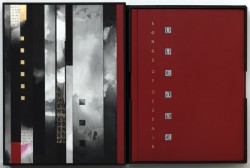 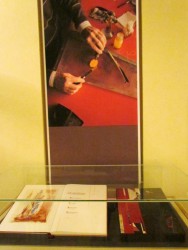 Aside from being given the drawings and the selection of poetry, the other organizational and design decisions for creating the book were left to me. These initial tasks included the paper, determining the size and format of the book, and the page layouts. I also worked at this early stage with the binder to understand the structure of the binding and the number of sheets that we could assume for each section.

The challenging and creative part involved writing the poem in calligraphy on the pages facing Manuel's drawings. His drawings were clearly the most important visual element of the two page spreads. The calligraphy needed to visually act in a supporting role. At the same time the text, usually a short line from the poetry, was required to have both a visual and signified relationship to the images. 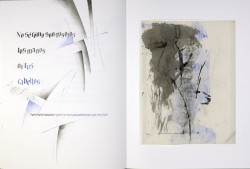 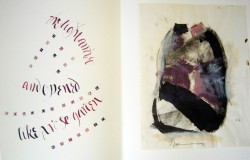 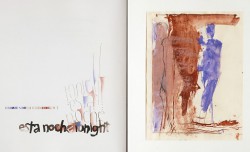 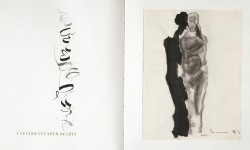 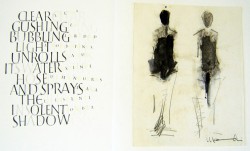 I tried to "read" Manuel's drawings by translating the colors and the character of his lines into verbally expressive terms, and then I would attempt to match these to the sense or atmosphere of the poetry. Occasionally somewhat understandable links between the two were possible, but in most instances, and particularly with the Lorca poetry, everything remained shrouded in mystery. In the beginning I struggled with this, but in time I began to see it as an advantage. I felt freer to focus on working visually, taking my clues from the drawings, their character, color, line, and particularly the shape of the figures and the spaces they occupied. I began to see the calligraphy as ultimately serving some functions. As a visual element, its function was to heighten the prominence of the drawing. And while obvious associations between word and image were not always apparent, the calligraphy in a curious way became the connector between the two.

Making associations or finding meaning between the two falls to the viewer. What may seem to be a mysterious connection to one person may be obvious to another. My goal was to somehow achieve a marriage between the words and image that allowed the two, poetry and figure, to speak, if you will, with one voice.

The Neri project renewed my interest in making books. 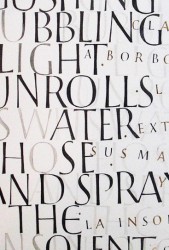 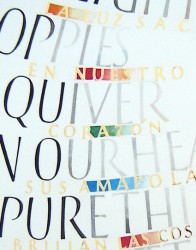 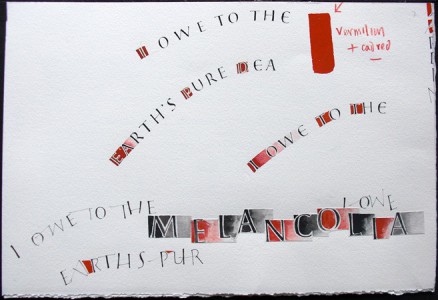 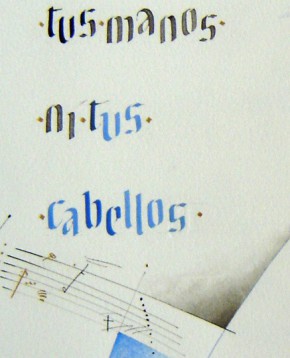 IMAGES OF OTHER BOOKS 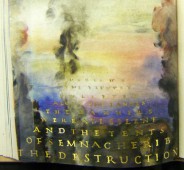 A recent project involved a collaboration with eleven poets. David Annwn(refer to Part 1) was an important part of this project's evolution. In 2011 we taught a class together at Sunderland University in the UK. Our work involved making responses to music. David wrote poems and I turned expressive marks into letterforms. It was an inspiring experience that led us to embark on a new collaboration. After a few months of working together, we concluded that the participation of other poets might be a good way to push forward. David gave me the names of six from England, one from the Philippines, one from Singapore. I invited the three poets from the US.

I began the project by creating a series of abstract calligraphic sheets. I refer to them as "music sheets" as they were made in response to music. I aimed for a diverse range of images by working with different tools, different mark making sequences and a variety of musical selections.

I sent a package of materials to each poet that included a number of the music sheets, samples of my work, and a letter asking if they would be willing to contribute a poem to the project. I requested that they choose one of the music images and align it with a poem that they had already written or if they could, to write a new poem.

*Puzzle in the Mirror

*Out of the Air

All of the poets responded and five have written new poems, while the others chose from previous works. I used the poem/image combinations as a source of inspiration for the design of new expressive letterforms and page compositions. This process led to the eventual creation of one-of-a-kind books for each of the poems. These books and the sketch materials that I produced are now my foundation for the making of one final book that will be an expressive interpretation of all the poems.

After so many years of making visual translations of poetry, working closely with the poets themselves, has added new dimensions and an enthusiasm that I had not previously experienced

*The body and the spirit

*In Silence of Bells

Having taught calligraphy for more than 35 years, I now teach as little as possible. Instead, I work peacefully in my San Francisco studio, enjoying creation of books in collaboration with poets from different part of the world.

Private and with Calligraphers

*10
*1 With Suzanne Moore in Lindisfarne Island, UK
*2 With Donald Jackson in Wales, UK
*3 At Millennium Centre in Cardiff, UK
*4 With Katharina Pieper and Jean Larcher at Documenta in Kassel, Germany
*5 With Giovannni De Faccio and Luca Barcellona in Abano, Italy
*6 With Brody Neuenschwander in Venice, Italy
*7 At Akademie Der Künste with Carl Rohrs in Berlin, Germany
*8 A group session at Akademie Der Künste in Berlin, Germany
*9 Doing Syakyo at San-zen-inn in Kyoto, Japan
*10 Sketching in New Zealand
No part of this article and images may be reproduced without permission.
» SPECIAL ARTICLES in English
« Thomas Ingmire CALLIGRAPHY AS AN EXPERIMENT Part 1
"Calligraphy in the Cold" by Christopher Haanes -Part 1 »