The Activities of the Kanji Explorers

At Ritsumeikan University’s The SHIRAKAWA Shizuka Institute of East Asian Characters and Culture (the “SHIRAKAWA Institute”), there are two ongoing projects based on the results obtained from the research by the university’s own honorary professor, the late Mr. SHIRAKAWA Shizuka: One is a series of cultural enterprises with the purpose of popularizing and educating people in the cultures of Eastern letters, and, the other is a learning technique research project, which is attempting to promote and heighten the level of study on the culture of Eastern letters.
Among the cultural enterprises are the selection and award presentation of “The SHIRAKAWA Shizuka Institute of East Asian Characters and Culture”, the production of teaching materials based on the SHIRAKAWA Method on Letters, and kanji learning workshops for the general public.
The Honorable Professor SHIRAKAWA emphasized the necessity of a systematic kanji education to “understand” kanji characters rather than to simply “memorize” them and, as a method, poured his efforts into the study of kanji letter forms. The SHIRAKAWA Institute is planning various programs in the hopes of providing opportunities for the general public to understand the structure of kanji characters.
In 2007, we established a series of workshops for parents/children and the general public called Kyoto Kanji Tanken-kai, the Kyoto Kanji Explorers. At each session, we select a specific topic. Through actual observations and experiences – rather than merely sitting at a desk to study – the hands-on kanji workshops aim to teach the formation and system of kanji characters. There are children who are proud to possess a proficient level of knowledge on kanji characters, enough to embarrass any grown-up. However, even though those children may read, without any problem, all the kanji characters with sakana (fish)-“hén” – the left-handed radical of kanji characters -- that are printed on a teacup at a sushi restaurant, if they do not know the variety of fish represented by those kanji or understand the reason why a character “酉（とり: bird)” appears in the kanji “酒 (sake)”, all they are doing is merely cramming the information into their heads.
Kanji characters exist not merely as letters but also as the representations of the surrounding nature, society and culture that gave them birth. Alphabets also have hieroglyphs as their origin but the symbolism is now lost. Our workshops were formed with the aim of making others understand the kanji system as well as the background stories of those people who have continued to use kanji characters for 3500 years without barely altering the original contexts (shape?).
The Kanji Explorers meetings in the year 2007 were held approximately once every two months at such locations in Kyoto City as the City Zoo, Botanical Gardens, Traditional Industry Museum, Kitano Tenmangu Shrine and Gekkeikan sake factory in Fushimi and, for each meeting, we received applications that far exceeded our capacity to host. The workshop themes for 2008 are more or less a repetition of the previous year’s but there are many “Repeater” participants who attend the workshop each and every time. Also, we have gained a new partner in Nijojo Castle and held a workshop there with its building structures as the theme. Though, in the beginning, the Kanji Explorers meeting used to be held for elementary school students and their parents, upon popular demand made at the onset of the Explorers meeting at the Gekkeikan sake factory, the adult version of Kanji Explorers was born.
At all of the Explorers meetings, we present to each attendant a Kanji Card, showing a selection of kanji characters from the particular meeting’s theme. 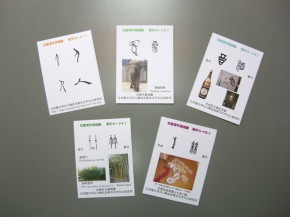 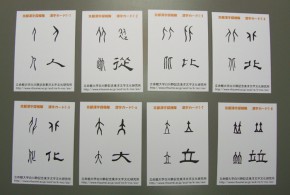 Cards given to the attendees

There are many kanji characters with a figure of a “human” as their building blocks. Out of the 1006 kanji that elementary school students learn, over 300 contain a part (or parts) concerning a human figure. Since those kanji are made up of “us”, the plan for a charade party was formed with the hope of having the participants experience the formation of those kanji characters with their own bodies.
After briefly explaining the history of kanji, the instructor would write the character “人 (hito, person)” on the whiteboard. Seeing the character, a unified voice arises saying “Hito~!” with an accent on the “i” due to the locale being Kyoto.
Instructor: “What forms make up the kanji ‘hito’ ?”
Students: “The forms of people!”
Instructor: “That’s right. Then, what kind of people’s pose does it come from? Let’s all stand up and try it out ourselves!”
The children in the audience who thus far had been responding with such an attitude as if to say “Don’t underestimate us!” now found themselves surprised with this unexpected turn of events. The accompanying adults were also at a loss as to what to do. The room became filled with the echoes of consulting voices and the movements of those who were trying out various poses. 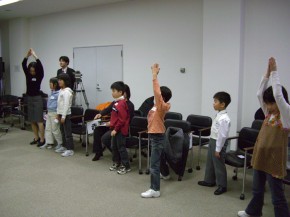 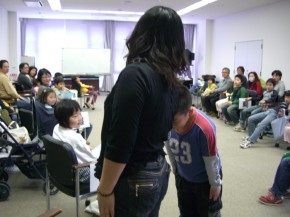 Photos: Examples of some poses at the charade party. Some face forward with their arms raised and the hands meeting at the top (left) while a mother and son team collaborate by the son plopping against the side of his mother (right)

Some faced forward, stretched their arms overhead and put together their hands. Some stood with their legs spread to the sides and did the “Ki-o-tsuke (Stand at attention!)” pose with their torso. Some simulated the pose of a standing start at a track and field race, while some others collaborated with their mothers by plopping their heads against the side of their mothers.
After a few moments, we displayed an image of 甲骨文 (“kôkotsu bun”: ancient inscriptions on oracle bones and tortoise carapaces). “The kanji character for hito from 3500 years ago was something like this.” Then came a cry from the audience, “Yoko muki ya! (It’s a profile!)” “Yes, people stand on two feet, don’t they?” Then, we did the Hito pose. “This is the basic pose. Please remember it!” After learning the basic Hito pose, all experienced the hito-related kanji characters with their own bodies by taking various poses by: facing to the right in pairs, with the basic Hito pose, to show the character “比” (to compare), which shows two people comparing height, or facing to the left in pairs to demonstrate the character “従” (to obey or follow. Originally 從⇒从, symbolizing the form of a person emulating another in front of him), or standing back to back to illustrate the character “北” (north. Originally “背” , which means to turn one’s back on someone (or something), or one person standing upright while the other is falling down to portray the character of “化” (to disguise or transform).

Thereby understanding what the Kanji Charade Party was all about, we moved to play the game of charades. “Now, let’s make kanji characters ourselves!” Breaking the group into several teams, each team was given a set of cards, which showed the transformations of hieroglyphs into modern kanji characters. Each team was to select a character and create a pose to show to the others and see if anyone could tell the correct character. “If you can’t do this, you will lose to the ancient people!” The following are a few examples of poses that the children came up with, using much effort and consideration. Can you see what characters they are? (The answers appear at the end of this article.)

Photos:Examples of poses. The result of the children’s hard work.

「The Kanji Explorers Part 2: Meeting Kanji at a Zoo

At first, the zoo’s veterinarian showed specimens of animals and gave explanations on the functions of each organ to the visiting children. Then, they were shown a sample of ancient letters and learned that they too are hieroglyphs. Awestruck voices were heard to say, “Wow! I got it!” 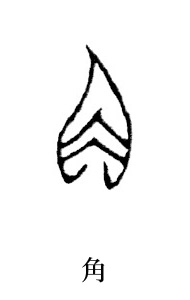 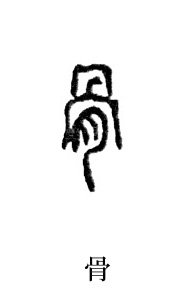 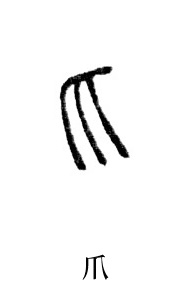 In the zoo, the children walked from one animal’s cage to another and listened to the description of each animal’s kanji character. At the elephants’ cage, they learned that the top part of the character “象”, which looks like “ク(ku, katakana, Japanese syllabic)”, signifies an elephant’s nose; the middle part, which looks like the horizontal version of the character “日(sun, day)”, shows the animal’s head and tusks; the bottom part, which looks like the bottom part of the character “家 (house, family)”, stands for the beast’s legs and tail. At this junction, some exclaimed “Honma ya~! (It really is true!)”. However, the talk about kanji character for elephants was only at its beginning yet!
“Why was there a HIEROGLYPH character for an elephant when there were no elephants in China?” All the children and even the grown-ups were lost for words.
“When the kanji characters were born 3500 years or so ago in China, there WERE elephants. The climate in China was a lot warmer then and there were plenty of trees. Not only elephants, but there were even rhinoceros, and those animals were used like cranes and tanks. But, because of climate change over time and the fact that people did not replant trees after cutting them down, the environment became less and less hospitable for elephants.” The zoo veterinarian then chimed in and said, “Nowadays, in China,
elephants live only in the regions bordering Thailand.” Everyone in the audience, both children and grown ups, listened intently to the stories that they had never heard before. Left Photo: Listening to the description of animals’ organs from the Kyoto City Zoo’s veterinarian.
Right Photo: A scene at the Hiroshima City Asa Animal Park.

The Kanji Explorers Part 3: Meeting Kanji at a Botanical Garden

The following is an example of a blunder or rather an unexpected turn of event at an Explorers workshop.
“A kanji character that originated from the image of a sprig of grass sprouting is ‘屮’, two sprigs became ‘艸’, and this symbol transformed to become ‘kusa (grass) kanmuri’ (kanmuri = the top part of kanji characters). Now, let’s play a kanji arithmetic exercise. What is this kanji?” Saying thus, I displayed “日＋月＋艸” on the screen.
The answer I had in mind was “朝” (morning), with the image of the rising sun and descending moon over a field of grass, as though in the world of Kakinomoto no Hitomaro (a famous 7th century poet)…

Then a child raised a hand and exclaimed “Moé!”
“What? Moéru? (= to burn)”
“No. ‘Moé’. There is such a kanji, isn’t there?!”, he asked, seeking the support of a nearby friend.
Yes, I’ve got it! Seeing what he meant, I drew a big “萌” (= Japanese slang: to have a fetish about or love for characters in video games or anime and manga) on the blackboard and admitted, “That is true! Unfortunately, the kanji I had in mind was NOT this kanji.” Much laugher ensued…

The Kanji Explorers: Prepared to Travel Anywhere in the Country

Since 2008, we have been fortunate to receive invitations from outside Kyoto. We visited the Asa Animal Park in Hiroshima in May, the Kobe Hakutsuru Sake Brewing Museum in July, and, in October, we realized an outing to the Itouzu Forest Park in Kokura, Kyushu. Also, under the co-sponsorship of the Bunkyo Education Supporters and the Media Harmony, Co., Ltd., a series of five sessions are being held in Tokyo. The Kanji Explorers’ workshops can be held anywhere in the country. With the hopes of further development, we look forward to finding partners who would like to cooperate with us to hold a single or a multiple number of sessions. 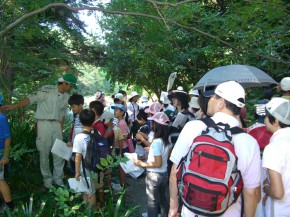 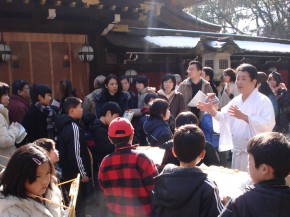 Left Photo: The Kanji Explorers also had an active outing at the Kyoto Prefectural Botanical Gardens.
Right Photo: A Kanji Explorers workshop was held at the Kitano Tenmangu Shrine in February 2008.

However, there is no requirement for us to visit a special public facility. It is amply possible to hold a workshop at a school or in a classroom. In such a case, at first glance, we can find the basis for such kanji characters as

The answers to the charade questions: 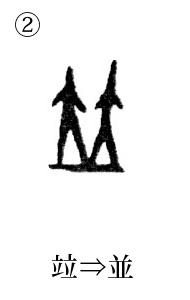 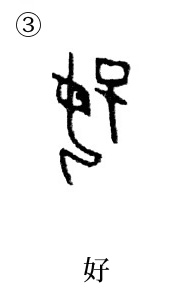 This article was translated from Quarterly Ja-Net Vol. 47, Published by 3A Corporation.