The Process in South Africa.

In South Africa the first part of the process was to bring people interested in words and letters together in a week-long workshop to develop new and interesting scripts that reflected the continent. Maud Bekaert came over with over 30 “word-fragments” from Belgian and South African poets and songwriters. Over 30 people from various places in Southern Africa and from the refugee community in Cape Town worked with each other for a week. 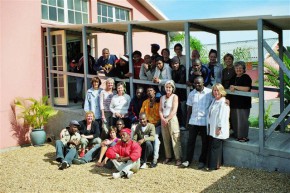 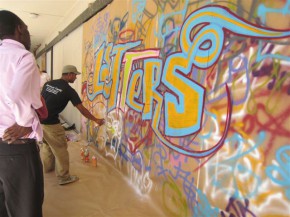 1. The South African artists/calligraphers
2. This from the first day of the workshop where Mak1one was teaching us to use spray cans!

This required skillful teachers and facilitators who were there to challenge, inform and encourage each person’s unique letters and how they interacted with the poetry or song fragment each was given to design. So, for example, Mak1one, a local graffiti artists took us through the first day of the workshop and let us loose with tagging and bombing using the instrument of the spray can, to make marks and letters. Andrew van der Merwe, gave us sticks and ink and helped us look at some of the scripts from the central and northern part of Africa. Heleen de Haas, brought us all back to the page and design, through making us dance together so we could understand how letters need to not only talk to each other but dance across paper. In between Maud had to advise from the point of how the designs would look carved in stone.

By the last day of the workshop, Maud had over 40 designs: very unique and different which she then took back to Brugge (her home town, and one of the main sponsors of Wor(l)ds). Once Maud took the layouts of the designs back with her, the South Africans could only wait and imagine what would happen: whose designs would be chosen and how would they look in stone. However other initiatives were bubbling in South Africa as a result of this working together. But more of that later.

The process in Belgium

Thereafter it was over to the Belgian artists. Stone had been donated as well as a place for the carvers to work in: in Damme. The best designs were chosen and then for 14 months the carvers worked on their stones which you can now see displayed on the stone path. These stones will be auctioned at the end of September for orphans and vulnerable children. They worked in a disused school in Damme which one can also see on the Walk. 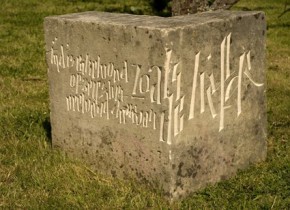 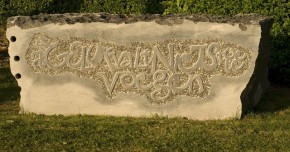 Special effort was put into the placing of the stones. For example the stone which carries the words” We spreiden onze vingers uit. We dragen de aarde op handen”: “We spread out our fingers. We take a hand in the earth” was placed in Damme the hometown of the poet “Frederik Lucien De Laere. One has to note that stones were sponsored by various individuals and organizations and all the carvers donated their time to carving the stones: some carving more than one stone: true generosity of spirit. 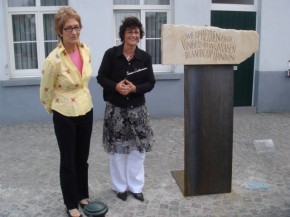 The Opening of Wor(l)ds and the Stone Walk

NKOSI SIKELEL’ AFRIKA!
GOD BLESS AFRICA!
These are the words which now greet all the visitors to the information centre in the lovely city of Bruges. They were carved into a huge piece of stone by Belgian carver Christophe Annys in a design by a South African artist and calligrapher (now UK resident) Lin Kerr. The opening of Wor(l)ds took place on the evening of the 9th June at the Concert Building in Bruges where the stone was unveiled by Ms Mantsaye Ngwaila, the head of Tourism and Culture at the South African Embassy. 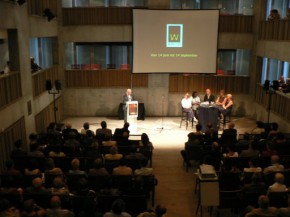 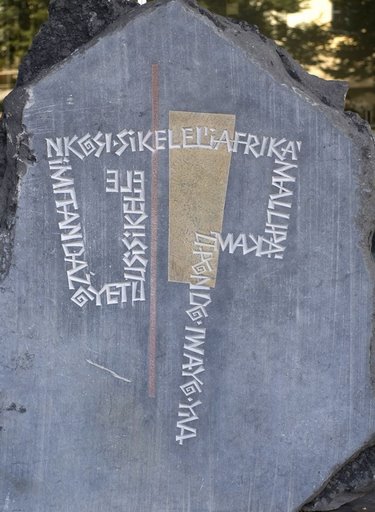 6. Opening
7. Nkosi stone by Lin Kerr. The first stone on the Stone Walk: at the entrance of the Information Centre and Concert Building in Bruges ©Jeske Liossatos/Scriptores

The opening ceremony, inside the beautiful Conzertgebou, was hosted by the mayor of Bruges, Mr. Patrick Moenaert, and attended by many artists and dignitaries, who packed the venue. Five of the artists from South Africa were also there. The excitement of the occasion was doubled by the presentation of the catalogue of Wor(l)ds by Maud Bekaert, the creator and energy behind the whole project. The catalogue of 195 pages details the incredible journey of the words, stones and people. The photographs are beautiful and it is on sale for Euro 20. The catalogue was also an act of love and generosity as it was sponsored and all labour was donated. The proceeds of sales go towards vulnerable children.

Walking the Stone Route one notices that the stones are very special and very different. They are different is size and in character. And of course different in design. They reflect the artists and the meaning and a lot of thought was put into placing them in the four towns.

One thinks of the stone: “Laat die Hemel Vrij”: “Set the Heavens Free”, designed by Ley Makalele. Carved into a blueish stone, by Luc Baeye, it seems to reflect the heavens as well as freedom. And knowing that Ley had to flee for his life from the Congo, and also his deep spirituality, it conveys so much more to one. 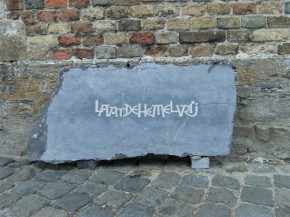 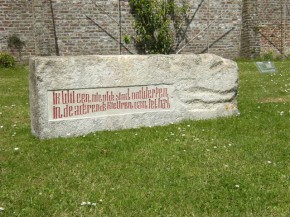 Sue William’s design of Frank Pollet’s words “Ik wil een nieuwe stad ontwerpen in de aderende kleuren van het hart”: “I want to design a new town in the veined colour of the heart” carved by Els Vanthournout combines the feeling of looking at the contours of a city with the warmth of the stone. 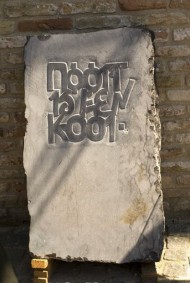 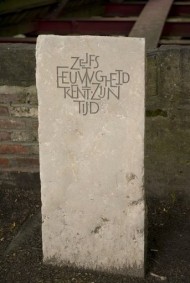 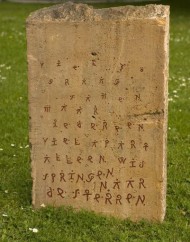 Bart Vonck’s words “Nooit is Een Kooi” – “Never is a Cage” and Eric Mawethu’s solid design reminds us that thinking in terms of “never” imprisons us just as interpreted in the carving of Luc Baeye.

Lin Kerr’s stone “Nkosi Sikelel' Afrika” as the start of the Stone Path reminds one that Africa chases a deep groove in your heart and then runs through your veins, even if one lives in Europe. Lin flew from the U.K. to Cape Town to be with all of us for the week in which we all designed the poetry fragments. Unnoticed and quietly she not only concentrated on her designs but offered support and encouragement to the younger, newer designers from the townships.
All 40 stones are along a path which one can walk or cycle along, taking time to enjoy the beauty of the stones, the meaning of the words and also the poetry of the surroundings. 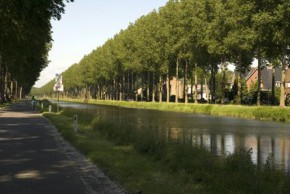 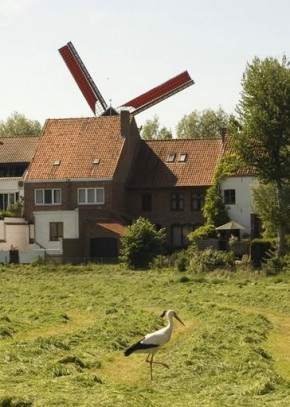 Bev Gillespie
Biography
Bev Gillespie works and lives. She was born in Johannesburg but migrated to Cape Town in her 30s where she studied at the University of Cape Town. Most of her work has been in the "not for profit" sector and she is currently working part-time for Breadline Africa (www.breadlineafrica.org.za), one of the beneficiaries of Wor(l)ds. Her interest in calligraphy stems from a course given by Hilary Adams. Later teachers included Lin Kerr and Heleen de Haas.