The following article was featured in the spring 2008 issue of The EDGE, a magazine published by Calligraphy & Lettering Arts Society. How can letter arts become relevant in our society? J-LAF will feature the "Wor(l)ds" project in a two-part series as something that shows us one possibility and trigger us to think about this question.

We hope that the series will provide you with a better understanding of the overall picture of the Wor(l)ds. 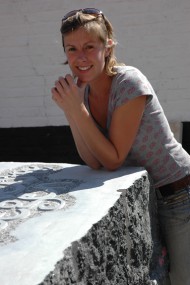 A petite young woman, who is a lettercarver and a dyanmic ball of energy, dreamed of using her talents to reach out and make a difference.

When Maud Bekaert first visited South Africa at the end of 2005 she was horrified by the AIDS pandemic and the 2 million orphans. She was also surprised to discover that there was a group of calligraphers who were prepared to share her dream. A year later she was back, this time with poetry and promises.

Brugge Plus and sponsers had given their backing to the project Wor(l)ds; poets and songwriters from Belgium and South Africa gave their words and Belgian carvers had volunteered to give their skills in realising this ambitious project.

2.Mauld videoing some of the designers / 3.Designers at work / 4.Carving in situ

Thus, in February 2007 a group of South African designers met in Cape Town to design letters "Spiced in the South to be carved in the North". I was privileged to be one of a very interesting group of people. It consisted by and large of mature women calligraphers and young black artists - refugees from African countries - Some of them had never designed letters before! 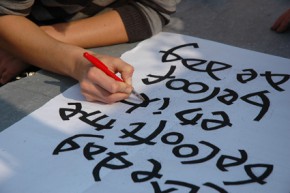 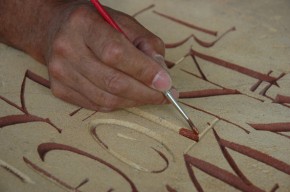 Inspiration workshops were run by a graffitti artist, Mak1One who demonstrated his art on a huge mural and Andrew van der Merwe who used African syllabries as source material. Maud took the final designs to Bruges and the first set of 40 stones, weighing 1-2 tons each have already been carved to be placed on a Stone Route. 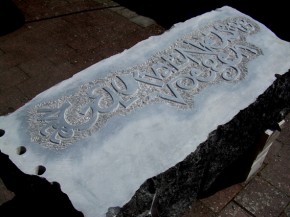 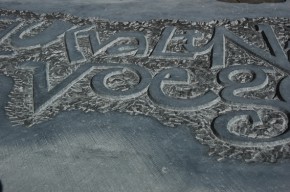 The Wor(l)ds festival and Stone Route will open for three months commencing with a concert by musicians, songwriters and poets in June 2008. At the end of September the stones will be auctioned to raise money for the youngest of the vulnerable children of Africa. The proceeds are managed by Sprinkle and Breadline, a Belgian and a South African organization which ensure that the proceeds go directly to the charities.

The Stone Route starts in Bruges at the Concert Hall and wends its way to Lissewege and Damme and Zeebrugge. The route to Damme can be followed by canal boat and other routes can be cycled or walked. where There will be a photographic exhibtion of the creative process of the project. at Damme Tourism centre. I visited Damme for the first time with Maud in November and it is a delightful village where the canal route culminates. 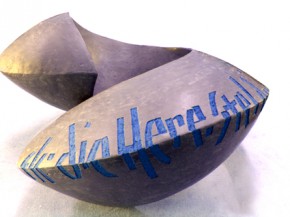 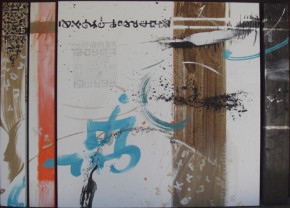 In Bruges, the calligraphy shop Symposion will display the original layouts.
South African calligraphers have been invited to exhibit their work at Manna Gallery for the summer. I will be participating, together with Heleen De Haas, Andrew Van der Merwe and others. There's some collaborative work between calligraphers and the top ceramicists, which were produced by top ceramicists in the Cape and then decorated by calligraphers with lettering.

Andrew van der Merwe will be in Zeebrugge during the month of July demonstrating his fabulous sand carving on the beach. Andrew, a surfer, has combined his love of the sea with his love of letters and all the proceeds from the photographs of his calligraphy texts on the beach will go to Sprinkle and Breadline.

And, three weeks ago Maud Bekaert was awarded the honour of being the most outstanding citizen in Bruges for 2008. She has worked tirelessly and energetically on this project giving unstintingly of her own time and resources. Following on from the design project last year, she has also been teaching letter carving to a new generation of carvers in South Africa, thus empowering them.

She deserves every accolade given to her.
For everyone else involved in Wor(l)ds, calligraphy has become relevant in a new way.